Christmas in the Woods

It wasn't bitterly cold but cold enough. Cold enough to dress the chihuahua in a Christmas sweater. We pulled into the Christmas tree farm, a smaller one in town. It was missing the hut with Christmas ornaments and the grown men with Christmas hats. No hot cocoa or tip jars.  It has something different.


A  three-minute walk from the farm, up a little hill and the baubles begin.  Red and green, silver and white.  Hundreds, if not thousands, are hung from bare branches.  The wire ornament holders are bent and wrapped around each branch a precaution against windy nights, I suppose.  Puppy (who is no longer a puppy) strains at his leash loving the smells of the woods.

He stops desperate to unearth something buried beneath the detritus of fall.  I tug him along.

Puppy obliges and keeps pace with my daughter.  Her strides longer, she's ahead of me. Her long hair a golden contrast against her cranberry parka.  The cranberry of her coat, the grays and browns of the woods, the faded yellows of leaves that crunch under our feet- nature's palette, perfect for Christmas in the woods.

We reach the top of the small hill and we meet a family.  A young child, a mother and a grandfather maybe.  He says to the boy, "Was this worth eating your breakfast?"  The boy looks at him and nods.  A small hand slips into a bigger hand and they head off down the trail.

We keep moving along and I see a woman with a pair of clippers snipping away at the brambles.  I called out, "Is this all your work?"

She stops, walks over, smiles, and says, "Yes."

"I can't believe no one bothers it. It's amazing!"  I said admiring her Christmas in the woods.

She looked at me and said, "Adults seems to understand when an ornament falls to pick it up.  Picking up the ornaments is picking up Hope."

Kris Hazen Haswell created the trail three years ago. She lost her mother in September and the Trail of Hope made its debut in December of that year.

She explains her mother, Jessie Nye Hazen, in the last part of her life, came to believe every day was Christmas.  Dementia, the most wicked of thieves, stole her understanding of time.

"The most heartbreaking thing for all of us was watching her mental status decline.  But at the same time living every day as Christmas was fun for all and gave her some comfort, " says her granddaughter Susan Haswell.  That she owned and lived on a Christmas tree farm probably furthered the confusion.

Once she was unable to care for herself, her daughters and a small army of caregivers stepped in to keep her at home and every night she would ask her daughter, Kris, if the presents had been packed in the car for the trip home to celebrate Christmas.

Home was Vermont where she grew up on a family farm. Crowned the Vermont State Canning Champion in 1943, she canned 698 jars of food that summer.  Her passion for home food production became her profession as well.  She had a long, full life teaching the basics of nutrition, running the Christmas tree farm she and her husband bought, and raising three children.

Friends still speak of her fondly.  Jessie Hazen was one of the last of the generation for whom an unusual elegance and work ethic was the product of grit, determination, and resourcefulness. For whom a world war shaped values and sharpened sensibilities. A world without Facebook, Pinterest, and cellphones, a world where wreaths were made by hand and food was grown on your own land and the excess put up for the long winter months. A world where a new family put down roots but didn't forget where they came from, where houses were modest, land was preserved, and family stepped in to care for you when you no longer could care for yourself.

When she died, she went back home for the last time to be buried in the state where she was born. It seems clear while her physical remains lie in Vermont, her spirit, however, finds itself on her small farm in Connecticut, in her daughters and grandchildren who miss her, and in the trail her daughters created, a trail of hope.

"It's really about hope for whatever people's struggles might be.  That they find the strength to carry on, acceptance or peace," says Kris.

"Each ornament is a symbol of hope and we encourage people to come and hang an ornament representing their hopes," her son, Ashton, adds.

For the kids, it's all about the magic.  Kris tells a story going back to 1966 of Santa's sled crashing in the woods across the way.  Today, a path for the sleigh is cleared and a landing tower has been recently installed ready to assist in preventing such a mishap from happening again.  The story also involves uncooperative elves and the subsequent banishment of an elf or two.

Someone suggested she light the trails to be enjoyed at night. She refuses.  She says that's when the elves and the animals come out to do their work.  Darkness is a must.

The ruins of an old house foundation provide the perfect bedroom for Santa.  He rests in a bed in a tiny house. The roof a tangle of pine boughs draping down the sides.  His black boots sit neatly on a small rug next to his bed. A pair of chairs for a guest or two who want to stay and visit awhile. Should he get the urge and find a moment between now and December 25th, a pair of ice skates hang waiting.

If you follow Cookie Cutter Lane, past all the branches hung with cookie cutters, you will find yourself in an outdoor kitchen where the elves make tea and cookies, mugs for the cocoa imagined lined up in a row.  Many, many angels have found new homes in the rough stone wall that was once part of a barn- the barn long gone.

It's people like Jessie's family that keep the true spirit of Christmas alive. The holidays can be such a difficult time for people.  Find a way to share a moment with someone.

From my home to yours, 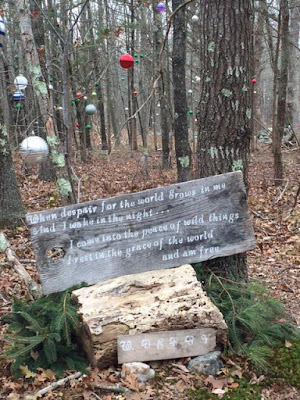 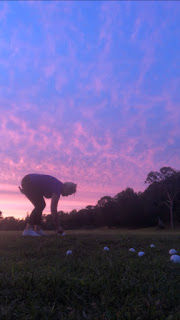